Some say revenge is a dish best served cold, I think my little brother was very happy to serve it with chicken.

Back in the late seventies my family operated the tourist attraction, Beothuck Village, located on a small Island in the Exploits River between Grand Falls and Badger.  Visitors would be ferried over in boat and after a visit to the log museum, one of us family members would provide a guided tour down through the trails to the replica of the village of wigwams at the lower end of the island. For those unfamiliar, the Beothucks were the indigenous tribe of Native Americans inhabiting the Island of Newfoundland until their final demise and extinction in 1829. 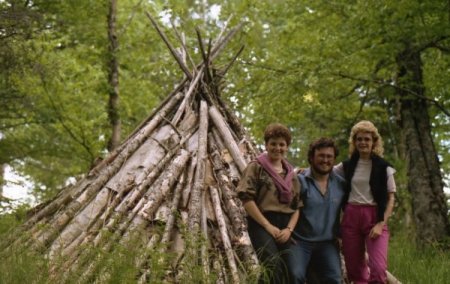 I was guiding a group of visitors one day, as that was my current lot in life, when a grouse fluttered up from the bushes, drumming its wings. The bird must have had chicks nearby. The visitors marvelled at this display and tried to take pictures before we moved on. I was unaware that my brother, Corey, then two years old, had wanted to come along on that tour and I left him behind at the museum with my family.

About fifteen minutes later I returned to the museum to find Corey sitting on a chair, his eyes red with tears, he had been crying about something. Dad explained that my little brother, once realizing that I had taken a group down the trail, had set off after me. He didn’t see the mother grouse as I had. With him being much shorter at the time, what he saw first was the group of chicks scurrying through the underbrush and when he approached them, that was when he met the momma. Fluttering high into the air, wings thumping its chest, the mother grouse must have looked to be an intimidating sight to a two year old boy. Dad described the scene of my little brother returning up the path screeching in tears, “The turkey! The turkey tried to eat me!”

After that, whenever I got the chance with my brother around, I would do my best rendition of my brother at two, “The turkey! The turkey tried to eat me!”

You wouldn’t think a two year old could hold a grudge? Who would think he could even grasp the idea of revenge at that age?

The next year we spent the winter living across the river from Bishop’s Falls and I had the chore of keeping my grandfather’s chickens fed; eighteen chickens and a single rooster. Well, let’s just say me and that rooster did not get along. It bit me the first day I feed them. It attacked me every moment my attention was elsewhere. It would leap up and with its talons, grip tightly to each of my thighs while trying to peck out my heart with its beak. Its wing flapping in a flurry as it furiously sought my demise. I eventually learned it was afraid of the shovel and as long as I had it in my hand it would not attack but watch vindictively from six feet away. (The shovel was five feet long.)

One night our family had been away all day and after dark we arrived home. As we passed the chicken coop I stopped in to feed the egg-providing poultry. It was pitch black and I could not see a thing, but I had the shovel in one hand and I hoped the rooster could see it.  I started to move inside to the feed bin when I heard the chicken coop door slam shut behind me. With the feeling of impending doom, I backed into the door holding the shovel out in front of me in the darkness; I thought I may have heard the rooster chuckle with evil glee.  But there was no mistaking the evil laughter of my three year old brother as he dropped the latch into place, securing the door from the outside and his tiny footsteps headed towards the house with the screams of me exploding from the chicken shed. “Open the door!!!!  The rooster! The rooster is going to eat me!” 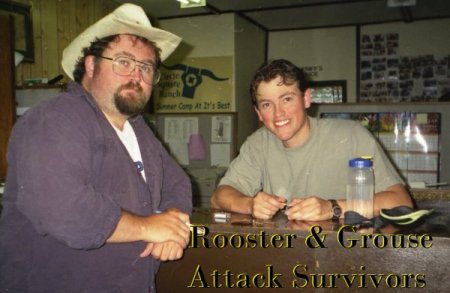 13 thoughts on “Thought 143: Revenge is a Dish Best Served with Chicken”