After a road trip with my grandparents halfway across the country, I found myself alone in one of our nation capital’s various malls. I purchased what I had come here looking for, a package of blank cassette tapes. (That’s how music was pirated in the eighties.) I hadn’t intended to buy anything else, but the lunch counter had a special on hamburgers. Being one to never pass up a hamburger special I decided it was close enough to lunch to avail of the deal. Sitting in the booth I ate, while at the same time I watched people come and go in the footwear department in front of me.

It was there I spotted her. The young woman was busy helping customers and arranging shelves. Her blond hair was pulled back with a banana clip and it spilled down her back in waves and curls, seeming to bounce and flow with each turned of her head. I stopped eating  and observed. It seemed she could have been the dream girl I always imagined existed out there somewhere. I couldn’t decide for sure because I could only get glimpses of her face.

She moved out of sight and was gone, so I finished my hamburger special. I was leaving Ottawa in a few days and knew I would never see this woman again. But could I leave never knowing if she was that dream girl or not? Would I spend the rest of my life wondering? I decided I had to get a look at her face before I left, just to satisfy my curiosity. Being male, single, in my early twenties I was curious a lot in those days.

I pretended to browse in the footwear section, but she was nowhere to be seen. Just my luck, she was probably gone for lunch. I was going to have to browse shoes for an hour! I found myself next to a bin of canvas sneaker boots. I hadn’t owned a pair of them since my childhood in the early seventies. Back then, black canvas sneaker boots was what every guy wore before the coming of Adidas. I don’t  remember having ever seen a pair of them since my elementary school days. Now here I was standing next to a bin of them, and they were on sale. Some company had decided to bring the style back, but more then just black canvas, there were also turquoise, green, red and pink.

I smiled. They look cool, I thought.  I pulled a pair of black ones from the bin. Back home people would think I was a little crazy wearing these old fashion canvas sneaker boots. I chuckled. Just imagine what they would think if I was wearing a pair of the colorful ones. The idea pleased me so I tossed the black ones back, deciding on the green, they were just the right color to be different, yet not bright enough to stand out and scream look at me, I want your attention! I sat and tried them on but they were too small.

Then she spoke, appearing from out of nowhere.

I looked up and realized this young woman could indeed be the dream girl of all dream girls, and her gorgeous eyes were looking at me, her beautiful smile warming the room, her delicate ears waiting for me to speak to her, to say something that would make her smile more, words of delight giving her a reason to run away with me and live happily ever after. Orchestral music filled the room, pure sunlight illuminated her her skin making her radiance glow. A soft breeze tussled her hair, song birds sweetly sang in unison, a baby panda rolled over and played with its paws in the air, in heaven, angels giggled. She seemed to draw closer to me in a single, seamless movement. Her loveliness robbed me of my memory to breath, her nearness caused my, um…  heart to swell, and I could not help but say what I said next.

“These green ones are too small, I need to find them in size ten.”

A Romeo I am not.

She searched through the bin before concluding, “There are no size ten in green, sorry.” I nodded, resolutely accepting the fact that there would be no sneaker boots in my future, but then she added, “They are very comfortable sneakers. I really like mine.” She pointed to her feet and the bright red pair of canvas sneaker boots that adorned them. With a cute little laugh she turned and walked away.

When she vanished forever around the corner I grabbed a pair of size ten bright red sneaker boots, and before I could realize what I was doing, I had paid the sales price and found myself shortly after wards walking down the road with them under my arm, thinking, I can never let my buddy who hates root beer ever hear this story! 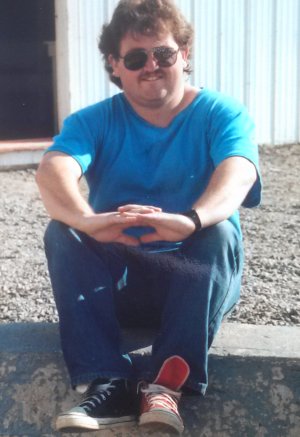 2 thoughts on “Women Who Make Us Foolish(Part II)”