(This is the conclusion of an 8 part story. If you want to read from the beginning, CLICK HERE.) 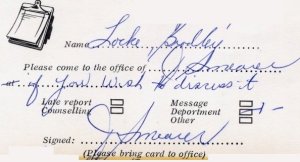 I crouched in the small, shadowed alcove under the stairwell trying to keep my pounding heart from being heard by the George Street Dorm Supervisor. He was several feet away and a single glance to his left, spotting me hiding in the shadows, would bring our entire escapade crashing down like a house of cards! Don’t look left! Oh please! Don’t look left! I screamed in my head. Th-Thud! Th-Thud! Th-Thud! My heart thundered in my chest, the blood pounding in my ears. My lungs demanded air, but I refused to breath knowing I could not do so without noisy gasps in the shadows. I was about to be discovered. I felt dizzy. I was going to be caught. My stomach knotted. The supervisor was going to find me hiding there with the incriminating spare key in my hand. Th-Thud! Th-Thud! Th-Thud! He was going to find me, and all because I couldn’t will my heart to stop!

It was nearly 2 AM and throughout all that had happened over the past hour Kevin patiently waited for his turn to call unexpectedly on our guests. We had waited 15 minutes after Danny has been attacked in his own room before Kevin set out on his portion of the plan. That plan was for him to do the exact same thing that both Rob and I had done earlier that night: open the door, pretend to be looking for Danny, find some object in the room, borrow it, apologize, then leave.

Kevin’s visit went a little differently. When he opened the door – it wasn’t even locked now – the two high school students were not asleep; no, even in bed. All the lights in the room were on and burning brightly. The visitors were wide awake and dressed, though they had removed the winter coats, boots and gloves that they had been wearing when tackling Danny out of the wardrobe. They sat at the desk in the room, discussing one thing or another. Overnight bags, packed, sat on the bed. They glanced up at Kevin standing in the doorway, completely unconcerned about a complete stranger in their room at such a late hour. Before Kevin could say a word, they pointed at the ceiling and in a matter of fact way said, “Danny is in Steve’s room on the second floor.” The boys went back to their conversation not really caring if Kevin went or stayed. Our guests seemed to have come to the conclusion that Danny must be one of the most popular persons on campus and no student could survive the term without his help.

Kevin returned to our base of operations in my room and informed us that it appeared the boys had decided to be up for the remainder of night. We laughed and agreed that if this was the case our work here was done. We could all return to our own rooms and enjoy a peaceful night’s sleep. We congratulated each other on a job well done.

After my partners in crime had departed I realized I had one remaining duty to perform. I had to return the key responsible for this night’s shenanigans back to  its owner in Steve’s room, Danny.

On my way to the opposite side of the residence my curiosity got the better of me. Were the boys still awake? I made a brief detour to stand outside their room. I could see the lights still on under the door and hear the muffled conversation from within. I smiled. We had given them a visit to remember. They would never forget the experience of the night they stayed in the George Street Residence. I was very satisfied with the way things had turned out, including, the unwitting involvement of Chris and the unexpected ambush on Danny. Most importantly I was happy that we had pulled it all off without getting caught.

Then, behind me, through the wooden door separating the hallway in which I stood,  I heard the front door open.

A minute later, as I pressed my body as tight as I could into the shadowed alcove under the stairs – in as deep as I could – I fervently wished over and over, Don’t look left! Don’t look left!  The resident  supervisor of the George Street dorm, out late, had just walked into the building. I was trapped between the porch door and his room. I couldn’t risk running up the stairs. Only the fact that he had paused in the porch to ask the night watchman if the night had been quiet prevented him from catching me outright and allowed me mere seconds to melt  into shadows. If things got reported in the morning, the last thing I needed was the supervisor remembering that he had found me outside the guests’ room in the middle of the night. I couldn’t get caught now. No please! Not now!

Using the power of my mind I willed the supervisor to keep moving towards his room. Willed him not to glance to his left. Willed him not to notice me crouching in the shadows under the stairs. I don’t know if my brain was actually that powerful, but when supervisor’s door locked shut behind him and I remained undiscovered, I was willing to believe.  I learned to breath again. Then, in a mad dash, I darted up the stairs to Steve’s room, quickly returned Danny’s spare key to him with the promise to one day explain the entire story, then spent the remainder of the night hiding in my bed.

To this day I wonder what career paths those two young men eventually chose to follow. Did we in anyway influence that choice? They were gone by the time we went to breakfast that Saturday morning in March. Never did find out who they were. We cautiously asked around if anyone heard anything about the visitors we had the night before. Most people in our building were surprised to learn that we even had visitors. No one new a thing.

We had successfully perpetrated a practical joke on targets forbidden, got away with it scott-free, and no one was even aware it had happened. We had dared what people only dreamed of and couldn’t brag about it to a single soul for fear that our involvement in the misdeeds could come to light. For nearly three decades only 7 people were aware that anything had gone down that night, and of that only three of us knew the complete story, till now.

I really hope there is a statute of limitations on practical jokes performed in collage. I am way to old to get any more deportments.

One thought on “The Key – Part 8 (The Conclusion)”