I think there are many things capable of accidently beheading a student, one such thing is the bus. So what should be done with such a deadly piece of machinery? Why, turn it into a jungle gym of course.

By grade two, my classmates and I were growing taller and wiser and realized in just one more year it would fall on our shoulders to pass on the school-yard tales to the next generation of kindergarteners; stories of Old Man Crawley and lost tractor drivers. It would be our job to describe in horrifying detail the principal’s relish for corporal punishment, although none of us ever actually received a strap, except maybe that bully with two last names. It would be our responsibilities to perform the Circle of Doom ritual on some non-thinking first-grader absent-minded enough to walk home alone. It would fall on us to use scavenger skills searching the dental debris for shiny sharp things. We had big sneakers to fill.

So in preparation for the role that awaited us that following September, five of us decided to investigate the truth of Old Man Crawley. After three years of standing on this side of his pond and looking across that small foul-smelling bog hole the time had come to find out if his cabin actually existed. Was the myth real? Having time to spare during lunch before the afternoon classes began, the five of us made our way along the path on the right side of the pond. We were about halfway around, nearing the point of the trail that we had never ventured beyond.  Just then, one slow guy at the back of our investigative crew nervously stuttered and asked, “Hey, w-w-who wants to play Gilligan’s Island in the old bus wreck? We can pretend it’s the S.S. Minnow.” He pointed down another trail leading away from the pond. 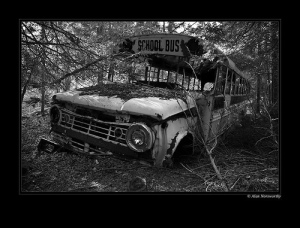 Abandoned in middle of the woods, near the pond, sat the stripped out husk of an ancient school bus. How it came to be abandoned in the middle of the woods we never knew. According to some third grader who had a cousin who knew a person who witnessed it happening, there was a story involving sticking heads out windows and light poles. I think everyone who ever rode the school bus heard that same story and it was always told by someone who had a cousin who knew the person who witnessed it happening. Whether or not this derelict vehicle was indeed the very bus that served as a guillotine on wheels was never proven. To us it was a huge play thing to climb in, out, over and on top of. I guess the school board figured the wreck served the same purpose as playground equipment and being a lot less expensive to maintain decide to let it rust there, near Crawley’s Pond, until the woods grew up around it and it faded from the administration’s memory.

Being more of a role-player then an investigator and never passing up a chance for play, I agreed to join the nervous guy lagging behind and headed with him down the trail to the bus wreak. Our remaining three brave friends stood in place, determined and resolute. They called us chicken, demanding that we continue on with them. I was unfazed by these taunts. The taste bud covered door handle, from the winter before, had proven my manhood. I no longer had to prove anything to anyone.

The woods fell silent as we left the pond out of sight behind us and those remaining gave up trying to shame us to stay with them.  My friend and I reached the bus and just as we climbed up on the hood of the old vehicle a sound roared through the woods that turned our blood to ice.

Beyond the trees, through which we had just travelled, peace was shattered by a very loud, a very angry, a very mean voice of a very old man yelling at our very brave yet very stupid friends.