I think hideous results can come from my eagerness to please.

The day before I began my first ever classes at Bible College, I had unpacked my two suitcases, made up my bed and settled into the little room that would become my home for the next two semesters. I stepped out for lunch and when I returned a young man I had never met before was setting up his stuff on the opposite side of the room. Extending his hand in a handshake he introduced himself as Shawn from St. Lunaire out by Griquet. “Looks like we are going to be roommates,” he explained.

The room we were assigned was at the beginning of the corridor on the first floor of the men’s dorm, so we only had neighbours on one side of us. That room was occupied by two 2nd year students who introduced themselves with happy grins and hearty handshakes, as Phil and Don. They hinted at some of the shenanigans that had occurred the previous year and promised that this looked like it would be a fun year. Don’s laughter had just a hint of intimidation to make us wonder with slight trepidation what exactly these two had planned for us; their new neighbours.

It was later that afternoon, when they asked me to assist them in pulling off a practical joke I jumped at the chance to help. My eagerness was not because I was much of a practical joker, for that was a skill I had yet to cultivate, rather I felt that this would be the perfect opportunity to get into their good graces. If I could impress them with my willingness to help it increased the chances of them looking at me as an ally rather then a target.

Their target turned out to be none other then my very own roommate, Shawn. Now remember, I had only known Shawn for just a few hours at this point, so even though he was my roommate I didn’t feel I owed him any loyalty. If he had to be sacrificed to assure my place of in the pecking order, so be it. I am not sure there is any place for Darwin’s ‘survival of the fittest’ ideas in Bible College, but there it was. If I was to survive, Shawn would have to be pranked. Phil and Don were happy with my willingness to help and as they slapped me on the back I realized how eager I was to please.

Don produced a hideous necktie from behind his back and Phil explained what they hoped to achieve. “Later tonight, we’ll drop back in for a visit. When we do, you help me keep Shawn’s attention away from Don. When Shawn is distracted, Don will steal all the neckties from his closet and replace it with that single hideous tie.”

Now this may not seem like much of a prank until you remember this was a Bible college, and it was a Bible college with a dress code. Neckties were mandatory for all classes. I laughed in my mind as I pictured my roommate sitting in his very first class wearing the wide hideous necktie that Don was displaying before me. It would be funny.

Later that evening the guys put their scheme into action and they hauled it off with such precision it made one wonder if they had not spent the prior summer interning with the A-Team. Phil pointed at some of the books on Shawn’s shelf and asked him about them. Don stood back by the door leaning against the wall, seeming to be somewhat interested in the conversation. I joined with Phil, pretending to be interested in Shawn’s choice of reading materials. Shawn was completely unaware as I watched Don slide open the closet door and reach in to slide all the ties off the tie rack and dump them out through the partly open door behind him. I then saw him calmly place the hideous tie inside the closet to replace those removed. He gave me a thumbs up and closed the closet door. I was amazed at how skillfully they had pulled off their plan. Shawn was six feet away and he never noticed a single thing.

The next morning I was sitting on my bed when Shawn returned from the showers and opened his closet door. I had been looking forward to this moment all night. His expression suddenly puzzled as he stared at the single tie on his tie rack. He slowly removed the tie from his rack and and raised it closer to his face as if he could not believe what he was looking at in his hands. His hand dropped to his side and his head tilted forward so his forehead lightly thumped against the open closet door.

I exploded with laughter. I couldn’t help myself. “We got you good!” I pointed at him and laughed harder. He looked up at me as the realization of what had happened was taking hold in his mind. He held up the hideous tie to me and simply asked, “Phil and Don?” I nodded yes and laughed more.

Shawn grimaced his lips, slowly shook his head and breathed out a long slow sigh as if trying to calm himself. I stopped laughing. He stared directly at me and then in a soft, quiet voice simply said, “Brad, look in your closet.”

I stood up and pulled open the door. There hanging on my own tie rack was a single wide tie even more hideous then the one Shawn now held in his hand.

I looked back at my new roommate with a single question wanting to be voiced. “Phil and Don?”

That first year in Bible College promised to be very interesting indeed. 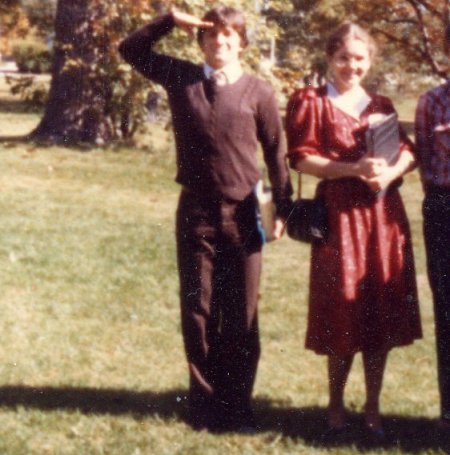 6 thoughts on “Thought 184: Hideous Results from an Eagerness to Please”